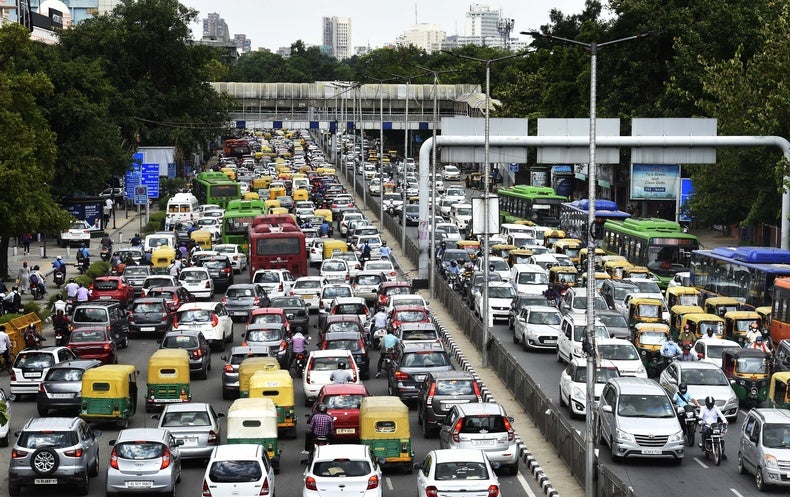 Emissions from the global transportation sector are expected to increase through 2050 unless world leaders institute legal and regulatory changes, the U.S. Energy Information Administration warned in a report released yesterday.

Under current policies, the United States and the rest of the world won’t meet global emissions reduction targets that scientists say are necessary to curb the worst effects of climate change, it suggests.

Transportation is the single-largest contributor to greenhouse gas emissions in the United States and accounts for about a fourth of global emissions.

While the report projected that electric vehicles would make up a significant portion of sales by midcentury in regions such as China and Europe—roughly 80 percent—EVs only would account for about 30 percent of cars on the road—a far cry from what scientists and the agency itself have said is necessary to stave off catastrophic global warming.

Electric vehicles currently make up 5 percent of global automobile sales. That number would need to increase to 60 percent by 2030, the International Energy Agency said in a report this summer, and the sale of traditional gasoline- and diesel-powered cars would need to end by 2035 (Climatewire, May 18).

The projected increase in transportation emissions is due largely to expected population growth and increased energy consumption in Africa and parts of Asia, the report found.

The report divides countries by whether they are members of the Organisation for Economic Co-operation and Development (OECD) or not. The population in non-OECD countries is growing at three times the rate of member countries, according to Michael Dwyer, an analyst at EIA.

“So the population is really pushing up the number of people that want to travel,” he said.

In addition, he said many of those people, as their incomes increase, are switching from public transit options such as trains and buses to personally owned vehicles and aircraft.

“So there’s more people to travel and more of those people are traveling on less efficient modes,” Dwyer said.

In the United States, electric vehicles are projected to make up about 12 percent of the fleet by 2050, according to separate EIA data. That number was calculated in September 2020 before President Biden beefed up emissions standards and states reinstated mandates for zero-emission vehicles.

Still, 12 percent is well below Biden’s target of decarbonizing the transportation sector by midcentury. Dwyer also noted that, overall, the vehicle regulatory landscape has not changed much since September 2020.

“There is very little difference in terms of U.S. light-duty vehicles,” he said. “The policies are about the same.”

Another worry: An increase in electric vehicles may also mean manufacturers shift their attention away from improving fuel economy of gasoline vehicles, Dwyer said.

The EIA report found that even with a proliferation of electric vehicles, fossil fuel production would continue to grow. That’s largely to help meet load and support grid reliability given the increase in intermittent generation such as wind and solar. Renewables are projected to be the main source for new electricity generation.

In fact, without major interventions, energy consumption is expected to double by 2050. While rapid population growth in parts of the world is driving the increase in energy consumption, other factors are expected to play a role too. For example, COVID-19-related energy flatlining in the United States, Canada, and Europe is not expected to last.

“There’s a tug of war there between efficiency and travel demand,” Dwyer said. “So there are countries that have much stricter fuel economy standards, particularly Europe, but as time goes on, travel demand starts to win that tug of war.”